Here’s a few photos from some very happy customers. We’ve also received emails from a number of people who received some very cool wearable Christmas gifts. Some of them even offered to send us photos… (hint, hint!) You know who you are, so grab a friend and a digital camera, take some pics and send ‘em our way. You’re too late for this month’s batch, but you can still be featured in our February customer photos! Now on to this month’s customers! 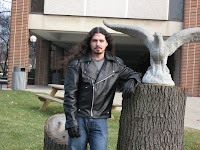 Aaron from Indiana received his Max Jacket and had this to say, “It arrived today!! As the jacket came, I felt a little sad in a way. I realized that I’m going to miss contacting you guys about the jacket… Now I know you can say I can buy something else from you guys so I can keep bugging you, but alas… I don’t have the money for the Sunstalker trench lol. Anyway, thank you so much for being so helpful.“ 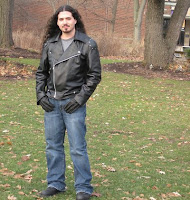 “Oh, and I was checking out newsletters and stuff. The AbbyShot girls are gorgeous, they should make a calendar wearing the 12 hottest items. Again, thank you so much I’m on cloud 9, and couldn’t feel more Mad Max appeased than I do now at the moment. Permit me to report on the jacket: It’s a big hit. Everyone from every race and gender has liked this jacket. Some people noticing it because of Mad Max, and others noticing it just because it looks great. I’ve handed out papers with links to the website…. so I hope at least a few more people can find something there at AbbyShot that they can like.“

Another happy customer is Anne from Florida who wore her Zoe Vest over Christmas to a party and received loads of compliments! And why wouldn’t she? Anne looks fantastic in her new vest! If you don’t believe me, then just check it out for yourself!

Coming in swiftly at the tail end of this post is

Dom from Texas who bought a Squall Jacket and sent some great candid photos. Squall confronts himself in miniature, plus who knew that Squall liked cats so much? 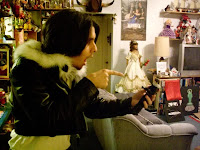 Dom had this to say about his new jacket, “I just received my Squall jacket on Monday and I couldn’t resist cosplaying as him! My friend was jealous of me and even wanted to steal the jacket from me! When her friends saw me, they were in shock that the jacket was real leather and a REAL jacket. PS: the cat is not mine, she belongs to my friend.”