This month, you wonderful folks sent in great photos of two “cult classic” designs. We’re talking about the iconic coats worn by Deckard in Blade Runner and Silent Bob in Clerks – let’s open the “Inbox” and see!

We start with a man named Fox who loves his new Deckard Coat, AND has the pictures to prove it:

It’s an amazing piece of work and I’m more than happy with it. I wore it to work and the compliments were immediate (one of the women I work with even asked me about it a few days later by referring to it as my “beautiful coat”

The color, the cut, the drape, the fit, the weight: ALL perfect. The long wait for this coat, as it turns out, HAS been worth it. 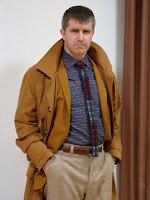 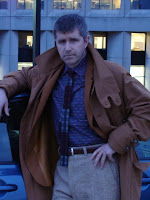 As you’re well aware, some Blade Runner Fans have, for some time now, debated about the collar on your coat. Having looked again and again at the DVD on Blu-Ray I’m convinced that YOUR Collar is “closer than MOST”… I think a lot of BR Fans “Remember it” bigger & bolder than what it actually was… I’ve been guilty of this myself. There ARE, in fact, some OTHER tailors and seamstresses (some of whom are your competitors) who make their OWN version of the Blade Runner Coat that many believe to be CLOSER in similarity to the coat used in the movie…

But frankly, I think they’re WRONG.

If you ever see some of the owners of those other versions of the Deckard Trench Coat actually WEARING them you’ll see grown men who look like kids wearing their Father’s clothes! LARGE, heavy, ribbed collars on HUMONGOUS coats that look heavy and stiff – more like those Waxed Australian Outback Slickers (and actually look like even if the wearer were to faint and drop to the floor, the jacket would keep standing up on its own!) 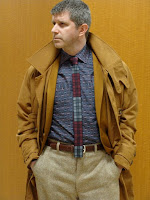 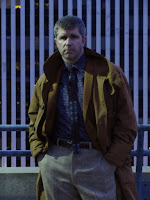 So, again for the record:
I think the AbbyShot Clothiers Coat’s Collar (try saying that five times, FAST) is MUCH, MUCH closer in look, feel & weight.

I love this coat!
Thanks again for all your great help and communication with me. EXCELLENT customer service.
A+
Fox Lidstone
Nova Scotia, Canada 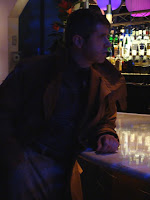 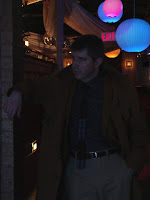 Another proud AbbyShot coat owner sent in some photos of his long coat getting some “urban exposure”: 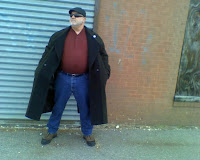 This is James from Maryland, who wrote us back in March about his new Silent Bob Coat, saying “This coat not only looks like s.b. coat, it is also very well made, looks top quality, first rate.” Now we say “Thank You” to James for the first-rate photos! 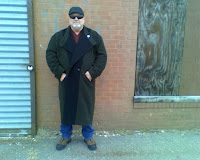 Thanks to Fox and James for another month’s worth of awesome pictures. Keep your cameras handy everyone, and hopefully we’ll see your photo here next month!

Update: Fox sent us so many great photos in his Deckard Trench, we couldn’t fit them all into this blog post. See the rest on our AbbyShot Facebook Page – just add us as a friend on Facebook to see the photo album!