We often say that AbbyShot has the coolest customers in the world, and this is the kind of story that proves it yet again. Meet a Kill Bill Jacket customer who created an incredible bike to help her through an extraordinary fight. 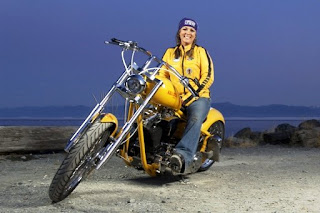 In early 2008, an email came in from the other side of Canada regarding the Kill Bill Jacket. This was far from an ordinary sizing question, however. The email began:

“Hi, I’m building a 250 pro-street chopper and painting it in the Kill Bill theme, all yellow with a black stripe, sword, blood… I’m looking for a jacket to go with the bike.“

WOW. It’s safe to say that you got our attention!

We corresponded for a while and as it turned out, Debbi from British Columbia is a fighter that would make The Bride proud. She was in the Canadian military for 20 years, did 3 tours (1 in Bosnia and 2 in Afghanistan), and had recently retired due to a major health issue in her life: breast cancer.

This custom build was not only a way to cope with her cancer, in Debbi’s own words: “this bike is about fighting to survive”. Throughout the next months the photos started to come in. 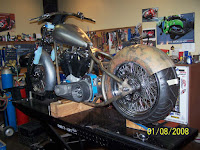 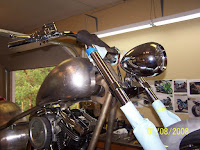 “here is a sneak peek at how iv painted the tins” 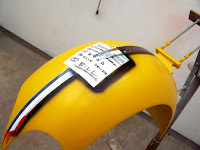 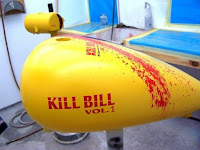 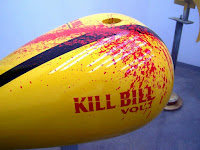 In 2009 Debbi finished the amazing Kill Bill chopper, proving that with dedication and drive a person can truly do anything. Pictures of the completed bike are beyond incredible, with even more details that are just mind-blowing. 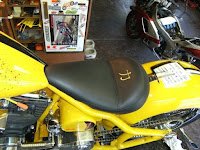 And of course, here are the full photos of the finished chopper:

Debbi told us with pride that her bike has won many prizes, was featured in the December 2009 issue of Motorcycle Mojo Magazine, and that “every bike run I go on wearing the Kill Bill Jacket on the bike… it’s a hit.”

AbbyShot is so proud to be a small part of your story, Debbi. Just like your awe-inspiring bike, we know that your fight will be another great victory. 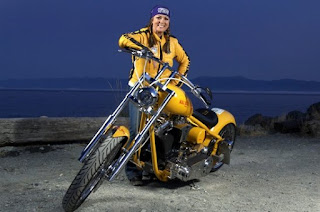 The post Amazing Custom Bike by an AbbyShot Customer! appeared first on .