The latest episode of Doctor Who made our skin crawl… so to speak! “The Rebel Flesh” was a very creepy installment of the show but also one that brought up many moral and ethical dilemmas. A delicate balance to be sure, but one that was pulled off quite well in our opinion. 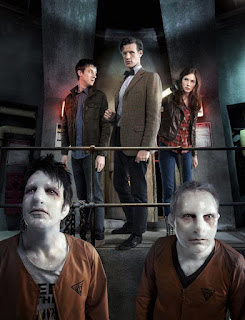 Some have complained that the episode moved at too slow a pace but we found it quite effective to build tension as well as audience empathy with the new characters we meet. Of course, this is also the first part of a two-parter so it will certainly be easier to judge this story as a whole once the second part airs (we’ve heard that part 2 will be airing May 28th on BBC1 and June 4th on BBC America due to next weekend’s Memorial Day holiday, just to give you the heads up!).

Our thoughts on this latest episode of Doctor Who are below but, as always, beware of the spoilers that await if you haven’t seen the episode yet!

To put it mildly: We can’t wait for part 2 of this story! So what did you think about “The Rebel Flesh”? Feel free to let us know in the Comments below…

The post AbbyShot Reviews Doctor Who 6.5: The Rebel Flesh appeared first on .